When Dance and God Talk to You Together

When you witness NBOC's first live ballet performance in 20 months and hear the striking intros to two ethereal Tchaikovsky numbers, you know that spiritual power will be talking to you in this opening program.

And it does. George Balanchine's Serenade, Jera Wolfe's Soul, and Crystal Pite's Angel's Atlas are all transformative ballets that touch on our mortality, impermanence, and microscopic size in relation to the vast universe. There's a subdued mournfulness standing right beside passion and perfection in each of the works. Moreso, there's deep honesty and humility running right through the whole National Ballet of Canada November 2021 program.

Dance has never seemed to perfectly express its era better than right now - or, at least, during the past century. You can see it just by observing how dancers' arm movements have changed over time, regardless of whether it's a classical or contemporary technique that the work is set in. While dancers in Serenade, choreographed in 1935 just after the Depression, confidently spread their wings in arms that perpetually point up to the sky, in Angel's Atlas, choreographed in 2020, they collect and draw the vast energy around them towards themselves using their elbows, in a lostness. And in Soul, choreographed during the pandemic in 2021, the dancers' arms intertwine with each other in the depth of love and all of its complex subjectivity.

The first time I saw Crystal Pite's Angel's Atlas with a friend, I was a busy, tired commuter and the experience was apocalyptic and jarring. It was February 2020, literally a month before the COVID-19 pandemic hit the world. Now, seeing it again as part of the National Ballet of Canada's Welcome Back season, it seems reverent, humble, and overwhelmingly eye-opening.

Tchaikovsky's sacred Liturgy of St. John Chrysostom, Opus 41, No 6 Cherubic Hymn sets the tone of the ballet before any of the dancers start to move. Together with Tom Visser's lighting design and Jay Gower Taylor's reflective light backdrop concept, Owen Belton's music affects the audience in a very profound way. The hymn's words speak to humanity laying aside all cares of life to receive the King of All, invisibly upborne by the angelic host. While the words are sung in Old Church Slavonic, the feeling of one's own soul opening up is evoked from a combination of things. It's both the music and the mystical wall of light that displays the slow discovery of a vast and unknowable universe.

The dancers are barefoot and dressed identically in loose black pants. Slowly they start to move in unison from their crouched positions where they were spread like shells across the stage. As they get up, they seem to be discovering their world and who they are in relation to everything else.

There is both joy and anguish in the movement throughout Angel's Atlas. A couple discovers each other and lives a form of life, then they part. Movement is repetitive and elbows seem to lead, where humans eke out a more primitive existence. The music evolves into flowing, abstract harmonies with bells, the black pants become long skirts swishing freely, and graceful, fluid movements start to form a visual culture onstage. At points, there are two groups who each move exclusively in unison, and sometimes the groups are divided by gender. This made me think of Pite's earlier work, Emergence.

A circle is closed. The storm has passed. A song resolves in its final chord. Everything is OK. Powers greater than us are in place, and we feel them. Resolution.

This is what screams out at you when the curtain opens after the first couple of bars of Serenade for Strings. 17 female dancers in blue hold their hands up to the moonlight, both signaling it and shielding themselves from it. You feel the abstract power of human resilience.

When Balanchine choreographed Serenade and it was performed in 1934 by the School of American Ballet students, he had no idea that almost 100 years later it would become a lasting, emblematic piece of inner power featured at post-pandemic theatrical re-openings. Its lasting quality is in its balance of surprise and inevitability.

Serenade still looks modern and is known for its technical difficulty to execute. Most of the movement and jumps are executed "en arabesque" (with the back leg stretched up high), requiring a lot of back strength. The intricate pointe work includes turns of the whole body executed on the toes with a sudden lift of one foot up to "retire" (pointed down at the other ankle) when the dancer faces front, and then down again to the top of the toes for yet another turn. And it's all done fast, to music that flies along quickly.

Balanchine's difficult technique was danced flawlessly this week by the National Ballet's Sonia Rodriguez, Jurgita Dronina, and Calley Skalnik in the principal roles. The choreography expresses harmony, goodwill, and togetherness. Serenade is Balanchine's elegy to women, but the ballet ends sadly and mystically. One of its themes is mortality yet it also suggests collective strength. 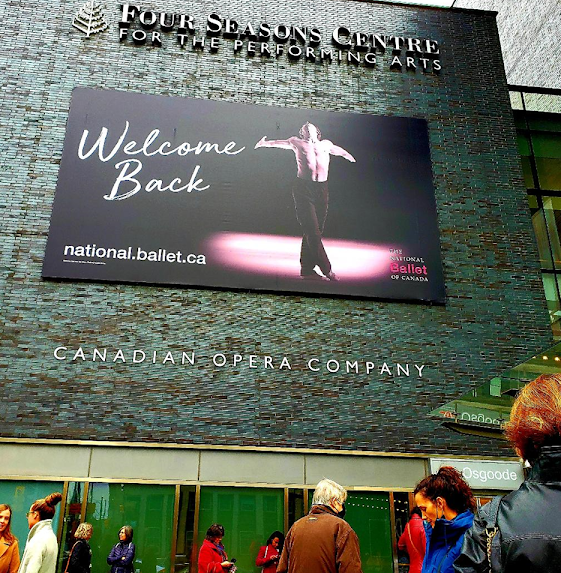 As we searched for the patterns in dance movements that were executed quickly and collectively on stage, the performance had already tapped into our subconscious. Controlled chaos. Resolution of forces. Connection to a wild beyond.

These are the common themes of all the pieces billed as NBOC's Angel's Atlas in this season's opening program. I still have Tchaikovsky's Serenade for Strings going through my head every morning when I wake up. It feels like a good thing.

New comments are not allowed.

When Dance and God Talk to You Together from national.ballet.ca When you witness NBOC's first live ballet performance in 20 months and ...